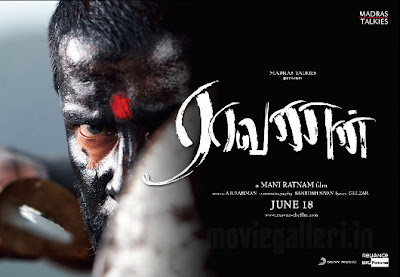 Do not continue reading if you haven't had the privilege of watching Mani Ratnam's latest venture.. and also if you've gotten sick of what i scribble ;)
Raavanan!!! Whatta movie.. shattered my writer's block.. hugely impressed by something after aayirathil oruvan.. here i'm writing away what I could infer from the movie..

The movie begins so.. from Aaranya kaandam where Seetha is abducted by Raavana..

In order to take revenge on Rama, Raavan kidnaps Seetha..
The movie begins where Aish(Ragini) ventures into the deep waters in the forest regions where Vikram(Veera) and his people live..
As a revenge on Prithvi(Dev)..


Veera keeps Ragini under lock and keys for a while.. he looks at her with great respect and as one with no measurable fear..as someone just like him.. he plans to keep her hidden form her husband for 14 hours ( analogous to 14 years of exile in the epic) and happens to extend the period to 14 days.. Mani, a man who is known to be careful even with the last detail about what he wishes to convey, does not neglect the mythological importance given to Raavana.. Raavana who is known to be the strongest devotee of lord Shiva, has great respect for women.. which Veera seems to have inherited pretty strongly..

Why does he kidnap Ragini?

The whole Raavan against Ram warfare results from the actions performed by Ram's brother Lakshman, where they disrespect Raavan's sister Shurpanaka, smoothly played by Priyamani.. and even here mythology says Raavan is Shurpanaka's half-brother and so does the story conveyed by Mani holds the relationship between the two.. The scene where the police official insults Priyamani by holding her nose, fine detailing again..
As I could interpret, Raama's sin committed during the killing of Vali had been depicted but without Vali himself.. where Dev hides himself while shooting Veera..

So Veera kidnaps Ragini and she's let to be on her own terms, Veera falls in love without his knowledge and Ragini is treated by his people as one among them.. showered all the love and care.. still Ragini wants to reunite with Dev,which is obvious and she keeps missing him.. The scene where Veera asks Ragini whether Dev is God.. Mindblowing acting..
And there comes Sundara Kaanda where Hanuman plays messenger..

Hanuman tries to convince Raavan to send Seetha back with him and explains Rama's heritage..
Karthik(forest :D) meets Ragini at Veera's place and conveys Dev's message and assures her that Dev is safe and is constantly trying to rescue her.. Dev sends Karthik to cut a deal with Veera and hence the meeting takes place and is unsuccessful..

Vibishna who is the more sensible of the two, tries to convince Raavan that what he did was a gruesome mistake.. to abduct someone else's wife is a sin of the highest degree and asks him to return her safely.. to which Raavan opposes and hence Vibishna joins Ram and his crew..
Vibishna played by Naren, is the well educated one of the two and convinces Veera to return Ragini to Dev, which Veera opposes and hence Naren tries to try and cut a deal with Dev and is shot by Dev.. This angers Veera and he decides to attack Dev..

The fight between Dev and Veera is a spectacle to the eye.. Camera does a divine job.. highlight of the whole movie..
Veera decides to leave Ragini to Dev, sacrifices his love, knowing it cannot last.. Dev accuses Ragini of not being truthful.. Ragini gets offended and leaves Dev to see Veera, Dev follows Ragini and finds Veera's hiding place and kills Veera..

So ends the epic and the movie conceived from it..

As always Mani stopped to note the most intricate of the details..
Vikram stands tall, really tall with his acting which cannot be described..
Aish does justice..
Pritvi,Prabhu,Priya and Karthik have been tailored to fit in perfectly for their roles..
The two cameramen are GODS of the profession..
ARR makes magic with the strings(Kaatu sirukki brought goose pimples)
Suhasini with the dialogs..least amount of english I ever noticed in a modern day tamil movie.. amazing work with the pen.. 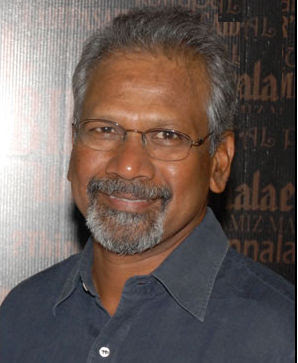